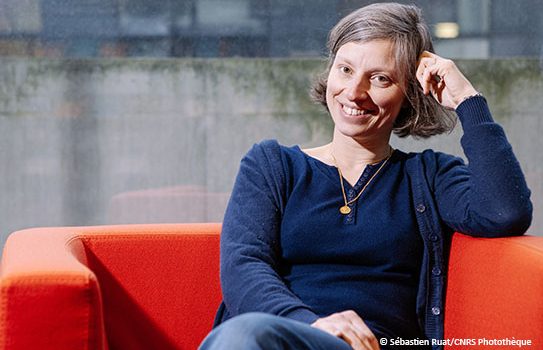 Laure Saint-Raymond will join the Institut des Hautes Études Scientifiques (IHES) as a permanent professor of mathematics in September 2021.

Born in 1975, Laure Saint-Raymond was admitted to École normale supérieure (ENS) in 1994. She obtained a DEA (a doctoral degree delivered in France until 2011), in numerical analysis at Pierre and Marie Curie University and another in plasma physics at Versailles-Saint-Quentin-en-Yvelines University, as well as a teaching diploma (agrégation) in mathematics. She then earned a PhD on the kinetic theory of gases at the ENS Department of Mathematics and its Applications, under the supervision of mathematician François Golse. She was recruited as a researcher by CNRS in 2000.

Laure Saint-Raymond was then appointed professor at Pierre and Marie Curie University She was seconded to Ecole Normale Supérieure from 2007, where she headed the analysis team before taking over as deputy head of the mathematics department.

Laure Saint-Raymond’s work focuses mainly on the asymptotic analysis of systems of partial differential equations, in particular those governing the dynamics of gases, plasmas or fluids. In particular, she has made fundamental contributions to Hilbert’s sixth problem on the axiomatization of mechanics, one of the 23 problems proposed by David Hilbert at the 1900 International Congress of Mathematics, which has not yet been solved: with various collaborators, she has shown that there is a continuous transition between the models of non-equilibrium statistical physics and the equations of fluid mechanics, and more recently she has studied the validity of these statistical models based on Newtonian mechanics. She is working in parallel on models in fluid mechanics that describe ocean currents, including the effect of fluid rotation and stratification on wave propagation and boundary layer phenomena.

Emmanuel Ullmo, Director of IHES, said: “We are delighted to welcome Laure Saint-Raymond, a brilliant mathematician whose innovative work has already been rewarded with numerous international prizes. Her arrival further broadens the fields of research developed at IHES.”

Laure Saint-Raymond adds: “I am seizing the opportunity I was offered to join IHES. This is indeed an institute that provides not only the ideal environment to carry out independent research, but also the means to develop collaborations and encourage a more collective work style. The institute has a long tradition in theoretical physics, algebra and geometry, and has more recently opened to probabilities. My own small challenge will be to also establish analysis, which brings other angles of approach to many problems at the interface with physics.”

Closing remarks by Emmanuel Ullmo, Director @Institut_IHES, about the book « Do Not Erase » by Jessica Wynne, concluding the event @InHenriPoincare.