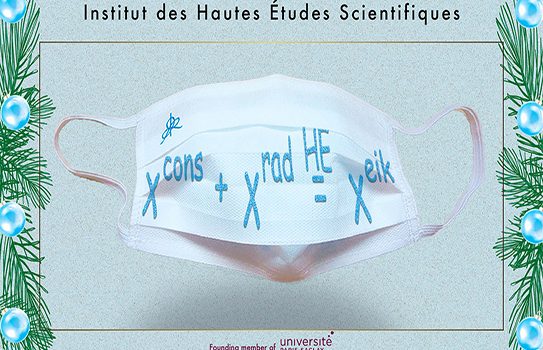 For researchers, moments of sharing, both formal and informal, are essential. However, in 2020, it has been a real challenge to find the means and formats to preserve a scientific dialogue and the quality of the links with collaborators and colleagues.

This greeting card therefore aims to pay tribute to the researchers who, throughout the world, have adapted, tested new tools and explored alternative approaches, always with a view to maintaining and fostering their exchanges, to facilitate the blossoming and circulation of ideas that will lead to tomorrow’s discoveries and advances.

The Institute’s scientists who wished to do so – permanent and associate professors, invited researchers, postdoctoral and doctoral students – have thus chosen an equation that had a particular meaning for them. Those equations appear on the greetings card, alongside a famous Euler formula, often presented as one of the most beautiful equations in mathematics. You will find below a short presentation of the scientists who participated, as well as their explanations of their choice of equation.

We invite you to participate as well by sharing the equation you would have chosen and explaining why.

Equation chosen by Thibault Damour, permanent professor at IHES since 1989

Thibault Damour is a theoretical physicist whose main research domains are General Relativity and Cosmology. His work was notably fundamental in the detection of the gravitational waves in 2015.

“This equation is the main result of an article I just wrote (“Radiative Contribution to Classical Gravitational Scattering at the third order in G”, Phys. Rev. D102, 124008) which solves a “hot” problem that has been open for almost two years, and that many other people have tried to solve.

This equation concerns the scattering angle between two classical point masses (for example two black holes) interacting gravitationally according to Einstein’s theory. It says that when we add the effect of gravitational damping on the scattering angle, the result admits a high energy limit (HE) which coincides with the angle obtained with the so-called “eikonal” quantum approximation.

This physical process is illustrated in the figure on the right, which is a space-time diagram showing the collision (at a distance) of two black holes producing gravitational waves.”

Arthur Parzygnat is a mathematician whose main research domains are Applied Category Theory, Mathematical Physcics and quantum information. He has been a postdoctoral researcher at IHES for a year and a half and is part of the ERC QUASIFT led by Vasily Pestun.

“This equation is called “Bayes’ rule/theorem,” though it is more common to see it written as P(A|B) P(B) = P(B|A) P(A). It is used to make inferences on outcomes based on evidence, such as diagnosing illnesses, it is the foundation of many machine learning algorithms, and some believe it drives how intelligent beings make decisions. The diagram drawn here is a recent categorical reformulation of Bayes’ rule, which does not rely on its probabilistic interpretation. Such a viewpoint allows one to use the more abstract concept as a definition (as opposed to a theorem) in a completely new context, where an equation such as P(A|B)P(B)=P(B|A)P(A) might not make any sense, but the diagram does. Considering how ubiquitous Bayes’ rule has been, it is very possible that we have only scratched the surface with its applications. What new insight can such a reformulation teach us? Where can it be utilized, and how can we interpret it?”

Katie Vokes is a mathematician whose main research domains are Geometric Group Theory and Low-Dimensional Topology. She has been a postdoctoral researcher for almost two years and is part of the Huawei Young Talents Programme since October 2020.

“This equation is the statement of the Gauss–Bonnet theorem for a surface M without boundary. This is a beautiful and fundamental result in differential geometry which relates the integral of the curvature K of M to the Euler characteristic χ(M) = 2 − 2 genus(M). The Gauss–Bonnet formula encodes the answers to so many basic questions that we might have while thinking about surfaces. Why must any two hyperbolic surfaces (constant curvature K ≡ −1) of genus 5 have the same area? And why can’t we make a genus 2 surface out of a flat piece of paper without introducing singular non-manifold points? “

Emmanuel Ullmo is a mathematician whose research domain is Algebraic and Arithmetic Geometry.

“Let E be a (modular) elliptic curve defined over Q, the field of rational numbers. In the early 80’s, two mathematicians, Bryan Birch and Peter Swinnerton-Dyer, proposed this formula where r denotes the algebraic rank of E, which is assumed to be equal to the analytic rank of E, and X(E/Q) is also assumed to be finite.

Open for more than forty years, the conjecture has only been demonstrated in special cases. And widely recognized as one of the most difficult and deepest mathematical problems still open at the beginning of the 21st century. “

Veronica Fantini is a mathematician whose main research domains are Geometry and Mathematical Physics. She is visiting the Institute for 4 months.

Robert C. Penner is a mathematician who is also interested in physics and biology. His main research domains are moduli spaces and their applications to physics and biology. His current work is providing important insights for the development of vaccines against Covid and other viral diseases. Robert Penner has been a regular visitor to the Institute for many years and has been the René Thom Chair holder since 2014.

“I think it is a really cool equation, with a pretty collection of symbols!

This formula expresses the Maurer-Cartan form ξ of the Lie algebra I have built for the topological group of orientation-preserving homeomorphisms of the circle, which I have been studying for 30 years. In other terms, it is the universal generalization of the Eisenstein form E2 (z) dz in hyperbolic what are sometimes called Penner coordinates λA . I am just now finishing a paper with Igor Frenkel where this formula figures prominently as a universal automorphic form intended to capture the Monster.“

Leonhard Euler is an 18th century Swiss mathematician and physicist. He made important discoveries in fields as varied as infinitesimal calculus and graph theory. He is considered one of the greatest and most prolific mathematicians of all time.

“Euler’s identity was voted “most beautiful mathematical formula of all time” in 1988 by a college of mathematicians.

It has the particularity of linking together the five great constants of mathematics: 0, 1, pi, e and i and according to Cédric Villani, “it is the unlikely combination of these five constants that makes this equation beautiful”.

Indeed, these constants have nothing in common a priori. Over the centuries, they have appeared in the great history of mathematics in very different contexts, to solve problems that at first sight had nothing in common.

It combines arithmetic, geometry, algebra and analysis in an extraordinarily condensed statement. »

Congratulations to Laure Saint-Raymond, who will be joining @Institut_IHES as permanent professor in September, and who will be plenary speaker @ICM2022! More about her: ... http://friendsofihes.ihes.fr/index.php/2021/02/08/laure-saint-raymond-joins-ihes-as-a-permanent-professor/

Please welcome the next ICM2022 plenary speaker, professor Laure Saint-Raymond @ENSdeLyon @Institut_IHES. In 2008, she received the prize from the European Mathematical Society, in 2015 — the Fermat Prize, in 2020 — the Bocher Prize.

Ahmed Abbes, Ofer Gabber (@CNRS research directors at IHES) and Hélène Esnault (member of the IHES' scientific council) are among the speakers of the online conference on ... #ArithmeticGeometry organized in honor of Luc Illusie on June 7-11. To register: https://www.ihes.fr/en/conference-on-arithmetic-geometry-in-honor-of-luc-illusie/